Two new publications [1,2] provide hope for relief from disabling pain due to stroke, a chronic condition that afflicts hundreds of thousands of stroke survivors in the U.S. and many more around the world. The publications report rapid and sustained pain relief using a novel method of drug delivery, perispinal administration[1], to accomplish effective brain delivery and relief of central pain, without surgery.

Perispinal injection has the capability to deliver large molecules directly into the choroid plexus and cerebrospinal fluid within the brain. (Figure 1). 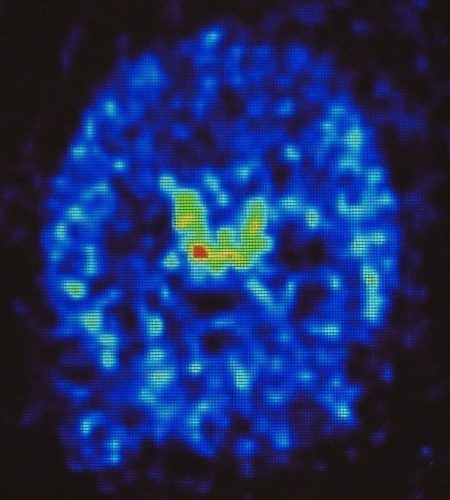 The first publication will appear in the November 2019 issue of the journal Brain, Behavior and Immunity, and its first figure is featured on the front cover of the issue.

Central pain, pain due to injury of neuronal tissue, in the context of stroke, was first described in detail by the French neurologists Dejerine and Roussy in 1906. Previously referred to as thalamic pain syndrome, now as central post-stroke pain, the pain is characteristically chronic, disabling and resistant to all conventional forms of treatment.

Data from the first publication [1] is scheduled for presentation October 23, 2019 at the annual meeting of the Society for Neuroscience in Chicago by Tracey Ignatowski, PhD, assistant professor at the University at Buffalo (UB). Ignatowski, with co-author Robert Spengler, PhD and her group of UB scientists, used perispinal administration of an antibody that blocks tumor necrosis factor (TNF) to treat central pain in a pre-clinical model. TNF is an immune-signaling molecule that amplifies inflammation and controls brain circuits. “Our current work demonstrates that treatments that selectively block brain-TNF reduce pain in animal models …. Previously, brain delivery was thought to require brain surgery or a spinal tap …. We have shown, for the first time, that effective pain relief in an animal model could be achieved by direct brain delivery accomplished with a simple peripheral (outside of the brain and spinal cord) [perispinal] injection …,” Ignatowski stated.

The second publication, in the journal Clinical Drug Investigation [2], by Edward Tobinick, M.D., director of the Institute of Neurological Recovery (INR®), demonstrates the clinical significance of the UB scientists’ findings with respect to disabling stroke pain. The new article and accompanying video  document immediate resolution of chronic, previously intractable, stroke pain after a single perispinal injection of etanrcept, another TNF blocker. “This novel treatment provides new hope for the many people who have survived stroke only to find themselves left with agonizing daily pain that does not respond to any treatment,” said Dr. Tobinick.

[1]Perispinal administration involves drug delivery by superficial injection under the skin in the anatomic region overlying, but not into, the spine. Dr. Tobinick is the inventor and patent holder of the PSE treatment method.

The Institute of Neurological Recovery® (INR®). A decade of pioneering discoveries in medicine. The INR utilizes the pioneering, patented perispinal etanercept (PSE) treatment methods invented by its founder and Medical Director, Edward Tobinick, M.D. The contents of this website, including text, images, and videos are ©2022 INR PLLC, all rights reserved.